Presenting the Ancient Russian Art of Magical Costume Transformations
Entwined in a Dream…of Music, Passion, & Dance…
COSTUME CHANGE EXTRAVAGANZA
(Duration : 10 Mins)
Like a dream where nothing is impossible, & everything unexpected should be expected… Gavin & Lydia takes you on a mystical journey of colour, energy, & magic. In 10 minutes,
feast your eyes on 11 amazing costume transformations, coupled with music and dancing from
a Spanish Bull-Fight, a cheeky Cuban Cha Cha, a Samba, to a romantic Rumba*. A shower of
confetti brings this dream to an end – whereby Gavin & Lydia transform themselves into
bedazzling white costumes. This show features their original invention of the Magic Mambo Cube
& the magical ‘pin-striped’ Dome where some of their changes take place.
*Alternate ‘up-beat’ finale : ‘The Jive Boogie’
Magic Mambo Cube
tim wo
e
h
. .
S
…The ONLY act in the world performing
the two beautiful art-forms of
DanceSport with Magical Transformations
reathtaking is the word of Gavin & Lydia, a.k.a. Soul Mystique. Featuring a world-class background in
Bprofessional DanceSport with endless titles since 1996 as Paris, Belgium, & Greater London Latin DanceSport Sport Champions, Gavin & Lydia exploded onto the American theater scene in 2000. Today,
they are one of the most
unique magical dance

Presenting the ancient
Russian art of magical
high-speed costume
transformations coupled
wi th show-stopping
professional Ballroom &
L a t i n – A m e r i c a n
DanceSport, they have
captivated, mesmerized,
a n d f l a b b e r g a s t e d
audiences all over the
g l o b e w i t h
theirperformances from
Australia, UK, USA to Europe. Their recent appearance on the first season of the reality TV series ‘Australia’s Got
Talent’ crowned them the Winners of Episode 4 & placed them as one of the most talked about Grand Finalists of the
season. Quoted as ‘simply extraordinary’ – they never fail to mystify, amaze, and entertain their audiences wherever
they go.
pp e A a
r
t
a n
n
c
ec
e
e
s
R
Television :
Australia’s Got Talent Season 1 (Channel 7 Australia – 2007)
NRA Australian Fashion Design Awards (Channel 9 Australia – 2006)
CNN “International Business Traveler” (UK, 2004)
Australian Film Festival Awards (Australia, 2001)
Good Morning Sacramento (USA, 2000)
Stage Productions :
Charity Gala Show – Tribute to 2005 London Bombing Rescue Teams, London Palladium Theater (UK, 2006)
Magic Variety Gala Production – IBM British Ring Magic Convention (UK, 2006)
‘One World’ Spirit of the Dance Productions, Eldorado Casino (USA 2000-2001)
Cruise Ships:
Cunard Lines – Queen Mary II / Queen Elizabeth II – Grand World Voyages
Holland America Lines – Grand World Voyages
Royal Caribbean International Cruise Lines – USA / Europe
Orient Lines/NCL, M.V. Marco Polo (2001-2002) – Grand World Voyages
Gavin Skinner & Lydia Lim
Paris International Open Latin Championships
(Paris, France, 2000)
Belgium Open Latin Championships
(Antwerpen, Belgium, 1999)
Greater London Open Latin Champions
(London, UK, 1998)
Singapore International Open Latin Championships (Singapore, 1998)
Lion City International Open Latin Championships (Singapore, 1997)
Australasian Open Latin Championships
(QLD, Australia, 1997)
Queensland Dancesport Classic Open Latin Champions
(QLD, Australia, 1996 to 1998)
…A creation by International DanceSport Champions
“Soul Mystique are a World Class Act. They could draw a crowd anywhere and that’s what this show [Australia’s Got Talent] is about” – Grand Denyer, Australian TV Presenter
“Soul Mystique…Utterly Amazing, Unique, Fantastic, I loved it!!” – Tom Burlinson, Actor, Singer, TV Host, Theatrical Producer
“They live on the stage! We love them!” – Dannii Minogue -Australian Singer-Songwriter, Actress, Fashion Designer
“They are the Real Deal…They Make time Stop!” – Red Symons, Australian TV & Radio Host, Writer, Musician
“I am writing to highly recommend Soul Mystique as an act for any event, any night, and any occasion. They will steal the night. Soul Mystique performed on Channel 9’s nationally
televised NRA Australian Fashion Design Awards on December 9, 2006 and was the one act everyone talked about. Gavin & Lydia were extremely professional, understanding of our
production requirements, flexible and friendly to all involved. If you’re looking for something different, trying to make an impact, or just want your night or event to be something special then
these guys are perfect for you. I cannot recommend them enough – they are fantastic!”- Teague McGrath, Executive Producer, NRA Australian Fashion Design Awards, Channel 9 (Australia)
“A Beautiful & classy act…They have what it takes and I am so privileged to have worked with them”
– Martin Lewis, Hollywood Magic Castle Magician / Lecturer, Writer, & Producer in Magic (Hollywood, USA)
“The highlight of the night was Soul Mystique who blew delegates away with their amazing performance of dance & magic. Our delegates were amazed and left wanting more”
– Bev Johnson, Event Manager, Event Planners (Australia)
“Gavin and Lydia are very professional and makes it really easy to work with them. The show is fantastic! Soul Mystique is definitely one of the best costume change acts
I have ever seen, if not, the best!” – Kien Meng, Magicians Network (Singapore)
“I had to admit that when they began their performance, I had no idea what to expect. The first quick change was a novelty but the wonderment mounted as the changes progressed
and I began to be intrigued how they were stashing the outfits away. I was not able to detect the vanishes even from the second row. There are very few things you remember in your lifetime…
What I saw last night was one thing I will never ever forget in my life” – Brian Pleasants, Author/Editor, Magic Makers Magazine (Australia)
“They blew the audience away. All I could hear were oohs and ahhhs during their entire show” – Dave Fox, Travel Journalist (USA)
“They were brilliant. They were the talk of the office for days!” – Jamie Mahon, Event Manager, Gold Coast Convention and Exhibition Centre, PO Box 1407 Broadbeach, Qld 4218 (Australia)
“On behalf of the Perioperative Nurses Association of Queensland and Taylored Images we would like express our thanks to Soul Mystique for their performance at our recent conference
dinner masquerade ball. Soul Mystique’s performance was absolutely spectacular. The speed and precision of costume changes leaving everyone amazed.
Soul Mystique left a lasting impression on all the delegates and helped to make our masquerade ball a huge succes” – Lauren Born, Taylored Images (Australia)
“Our Gala audience is used to the night starting with something unusual and exciting but let’s just say that this year they were awestruck! 550 pairs of eyes sat glued to
Soul Mystiques performance and 550 brains spun with the possiblity…how on earth did they do it all so fast? Their dynamic dancing coupled with an ability to change costumes so fast that every
man in the room wished his wife could learn the art, started off our night with an absolute high. Thank you Soul Mystique for your fabulous contribution to our best Gala Dinner yet”
– Sandra Sparti, Manager Regional & Events Services, Australian Institute of Management (Qld & NT, Australia)
“It was not magic. It was MAGICAL…This act could work any convention in the world and blow them all away!” – Alan Shaxon, President, International Magic Circle, UK
Reviews & Testimonials
Last updated : May 2007 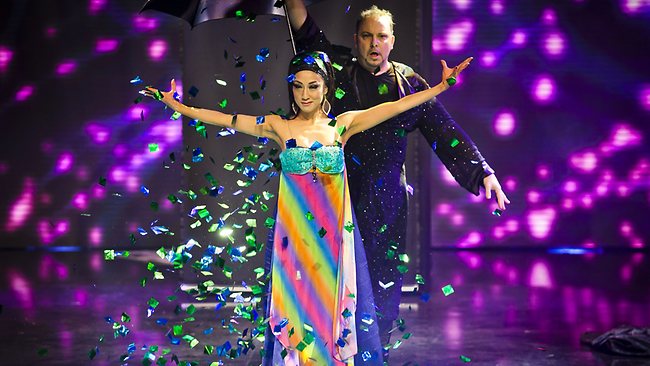