AN ELECTRIC FUSION OF DANCE AND ILLUSION

Brad Manuel is widely considered as one of the funniest and most creative magicians you are likely to see, a magician and comedian rolled into one. Brad’s unique shows feature his own original mind blowing magic, blended with his style of interactive comedy to deliver an experience that has been featured in over 15 countries and has been described in the magic industry as “COMIC GENIUS”

Brad is renowned for his “AUDIENCE INVOLVING” comedy magic and is a much sought after performer in the Australian corporate sector as well as several international markets. He has a very relaxed and casual persona which makes the “amazing stuff” he does even more amazing. Things like pulling 4 cocktail glasses from his shoe… FULL! To borrowing a credit card for an EFTPOS transaction, blowing it up and having it reappear inside a brand new sealed jar of peanut butter. Brad will also make one of your guests the star of his hilarious tribute to THE MUPPET SHOW all live on stage and more!
The show is best described as “A LIVE INTERACTIVE COMEDY EXPERIENCE”
If you have ever wondered how magicians come up with their tricks… It’s the rare innovative magicians like Brad create them, Brad is a very well respected name amongst international magicians as an inventor and original creator of many best selling magical effects and routines. Magicians worldwide currently perform routines created by Brad Manuel and the world’s best magic suppliers carry the BRAD MANUEL COMEDY MAGIC line of products and routines.
Brad’s corporate show “FUNNY TRICKS” is definitely ONE OF A KIND containing his own original amazing magic and comedy which you will only witness by experiencing one of his shows. There is only “one” Brad Manuel! 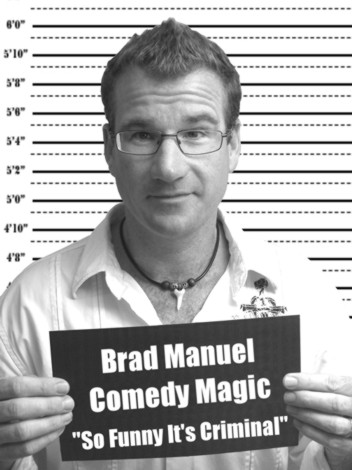