His feats of piloting the great mare Makybe Diva to victories in the 2003, 2004 and 2005 Melbourne Cups not only guaranteed Boss a celebrated place in Australian turf history but rewarded his determination to return to the saddle after a serious race fall threatened his career.

His trio of successive wins ensured him a place in racing immortality – no other jockey has achieved this momentous feat in the 144-year history of Australia’s most famous race. Boss has ridden more Group One winners in each of the past three seasons (2004, 2005 and 2006) than any other jockey.His 2005-2006 tally stood at 10: Eremein’s victories in The BMW, Ranvet and Queen Elizabeth Stakes; Racing To Win in the Doncaster Handicap and George Ryder Stakes, Serenade Rose in the AJC Australian Oaks, God’s Own in the Caulfield Guineas, Spark of Life in the Manikato Stakes and Makybe Diva in the W S Cox Plate and, of course, the Melbourne Cup.
When Glen Boss slipped from his mount in torrential rain on a racetrack in Macau in June 2002 the initial medical verdict pointed to an abrupt ending to his high-profile career.
When he crashed to the turf, Boss suffered two breaks in his neck that could very easily have led to life in a wheelchair. But the prompt action of a crack medical team and one of the world’s top neurosurgeons enabled Boss to make a full recovery and after six months in a neck brace amazingly he was back riding trackwork.
Not only that, but less than six months later, Boss rode Pentastic to fifth place in the 2002 Melbourne Cup.
“I was very lucky that such a skilled medical team was on hand in Hong Kong,” reflects Boss, who is in the prime of his career. “Once I knew that I would achieve a full recovery my determination to ride again took control”.
Although he has booted home more than 50 Group I winners since his debut as a senior jockey in 1990 in his home state of Queensland, the 2003, 2004 and 2005 Melbourne Cup victories aboard Makybe Diva stand out like a beacon.
“When I won in 2003, I thought ‘thank God I’ve done it’ because it’s every jockey’s ambition to win this race,” says Boss. “Knowing that you ended your career as a top jockey without winning Australia’s No. 1 horse race would leave you with a hollow feeling”.
Twelve months later, Boss lined up for the 3200 metres classic knowing that victory would ensure him a place in Australian turf history.
“Winning in 2004 was an unbelievable experience,” he says. “To me it was ten times a greater achievement than the year before. I just knew that Makybe Diva could do it if the circumstances were right. She’s got a great set of lungs, great temperament and the incredible ability to sprint at the end of two miles”.
When he dismounted after his sensational 2005 journey on the now-retired all-time champion mare, Boss exclaimed: “The final 300 metres was a surreal feeling as I knew she was about to create racing history. I just feel privileged to be her rider. I’m just a small part of this. I’m the lucky bloke they throw onto the saddle and steer her around. She does the job for me. The association I have had with Makybe Diva has been the most exciting part of my professional career. I owe her everything. I told Lee (trainer Lee Freedman) that if we get a soft run and get to the front early in the straight I was going to get on my bike and have them try and chase us down”.
Hall of Fame trainer Freedman’s view on the Boss factor? “His rides in the Melbourne Cup should be bottled up and studied. They have been perfect rides. He is an excellent big-race jockey. He gets into this ’zone’ he talks about and keeps producing the goods”.
Beaudesert-born Glen Boss has had a special relationship with horses since he was a toddler growing up on the family’s cattle property at Caboolture. As a youngster he won stacks of pony club awards and also did his share of breaking in horses. Leaving school at 15, he moved to Gympie to start his riding apprenticeship and after riding 60 winners in less than 10 months he moved on to the Gold Coast where success followed him. Boss moved to Sydney in 1994 – and that is where his star-studded career really began to flourish. Wins in the Golden Slipper aboard Flying Spur and in the Chipping Norton Stakes riding Telesto in 1995 signalled that a special horseman had arrived on the scene.
Boss regularly exports his talents overseas, winning acclaim in Hong Kong, Macau, Dubai, Japan and New Zealand. Away from the track, Boss has contracts with the Seven Network and News Limited, is currently working on his biography that will be released in late 2007 and is an accomplished speaker. Away from the track, Boss has built a steady following with his inspirational presentations in the business sector. A keen all-round sportsman who enjoys playing tennis and golf and watching his favourite rugby league team, the Brisbane Broncos, Boss and his wife Sloane have two children, Tayte and Carter. 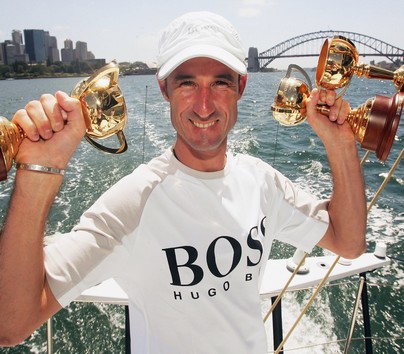