Swimming legend Grant Hackett has been anything but a fish out of water since joining the team at Wide World of Sports.

Arguably the world’s greatest long distance swimmer, Hackett is a sporting purist who brings a wealth of knowledge to his work.

Hackett joined Nine as a sports presenter after retiring from the pool with a record that perfectly suited his nickname, ‘Captain Fantastic’. Over three Olympics (2000, 2004 and 2008), he accumulated three gold medals, three silvers and a bronze – to go with four golds and three silvers from the Commonwealth Games.
He is the most decorated Australian swimmer in FINA World Championship history with 18 medals, 10 of them gold. He is the only swimmer to win four consecutive world titles in the same event (1500m freestyle) and he set world records in the 800m and 1500 freestyle.
He was honoured with Telstra’s Swimmers’ Swimmer of the Year Award in 2008 after entering the Sporting Hall of Fame with The Don Award in 2006. He has also won the Australian Middle Distance and Long Distance Swimmer of the Year Awards.
Hackett joined Nine in 2008 as a regular on the health program What’s Good For You 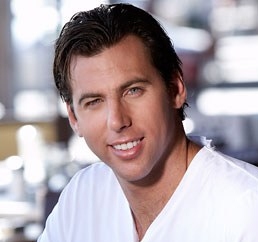