The Hoodoo Gurus got together in Sydney on January 1st 1981 to play their first “show” in a inner city lounge room. Core members are Dave Faulkner and Brad Shepherd who are joined by Kimble Rendall, Rod Radalj and James baker. No bass player. When the band sign with Big Time Records they consist of Dave, Brad, James and bassist Clyde Bramley.

Their first single was “Leilani”, followed by “Tojo” and “My Girl” which were both released in 1983.

Album number 1 “Stoneage Romeos”, was named Australian Debut Album of the Year and was released in America where it stayed at number 1 in the Alternative/College charts for 7 weeks, becoming one of the most played albums for the year on the college network. Drummer Mark Kingsmill joins in time for their first tour of the United States. The Gurus take on Michael McMartin as their manager.

Album number 2 “Mars Needs Guitars” went gold within three weeks and platinum shortly afterwards. The singles were “Bittersweet” and “Like Wow Wipeout!”, “Death Defying” and “Poison Pen”. The Hoodoo Gurus played Europe and the USA including sell out shows at London’s Hammersmith Palais and a two month tour as special guests with the Bangles.

Album number 3 “Blow Your Cool”, released 1986 with the single ‘What’s My Scene” becoming the band’s highest charting single. “Blow Your Cool” concert tour takes the band to 19 countries playing 204 venues in the year including one for broadcast by MTV America at the Ritz in New York a show that was, like most Gurus shows, a total sellout. Bass Player Rick Grossman joins the band in 1988. The line up is now complete Dave Faulkner, Brad Shepherd, Mark Kingsmill and Rick Grossman.

Album number 5 “Kinky” released in 1991 with the singles “Miss Freelove ’69” and “1000 Miles Away” hitting the top 40 charts. In the US “Kinky” is the band’s first album not to top the Alternative Charts it stays at Number 2 for five weeks behind REM’s Losing My Religion.

Albums 6 ~ 7 the band’s first compilation album brings together all their Australian singles to date under the title “Electric Soup” and is released in mid 1992 along with a collection of their b sides and rarities, “Gorilla Biscuit”. The album goes treble platinum. The Hoodoo Gurus complete the country’s most successful national tour of the year, selling out over sixty dates. “Electric Soup” is noted at the Aria awards as BMG’s biggest selling domestic album of the year.

Album number 8 “Crank’, joins all the previous Hoodoo Gurus studio albums in going gold within weeks of release.”The Right Time” is the first single released and is followed up with “You Open My Eyes”, the first to be written and sung by guitarist Brad Shepherd. The “Crank” tour again takes the band through the US, Canada and Europe but this time includes a one month tour of Brasil, which turns out not only to be hugely successful but also one of the most enjoyable the band have ever undertaken.

Studio album number 7 is started immediately upon the bands return from South America. “BLUE CAVE”, released in May, 1996, was produced by Charles Fisher who also worked with the band on “Mars Needs Guitars”. The singles released from the album include “Big Deal” and “Waking Up Tired”, “If Only” and “Down On Me”.

One week prior to leaving for another tour of Brasil the Hoodoo Gurus issue a press release announcing that 1997 will be there last year together as a band. There are no reasons for calling it a day other than it just feels like the right time to do so. The press release ends with: “The Hoodoo Gurus wish to thank all of their fans who have supported them over the past fifteen years. It’s been quite a trip.”

October 1997 – The Hoodoo Gurus announce the dates for their farewell tour of Australia. The “Spit The Dummy” tour has the band doing some 58 shows in pubs around Australia during November, December and the first two weeks of January. They play to over 115,000 people, arguably the biggest and most successful pub tour in Australia ever. To coincide with the tour the band release a double album package – the album entitled “The Armchair Gurus” features seventeen of their ballads and slower songs while “The Electric Chair” album contains seventeen pure party tracks. The double set contains two tracks not previously found on Gurus’ albums and five totally new songs including the single “The Real Deal”. The album goes gold.

The Hoodoo Gurus’ farewell (“for a while”) public performance is at the Palace in Melbourne on January 11.

After a four year hiatus from touring the band reform to headline the premier all Australian artist music festival, Homebake, in Sydney on December 8, 2001. Twenty two thousand people attend.

A triple album set (“Bite The Bullet”) containing live material from the farewell tour, the better live radio performances from over the years and a collection of demos and rarities is released in Australia in 1998.

This is followed in 2001 by the release in the UK and Europe of the definitive singles and b-side collection entitled “Hoodoo Gurus – Ampology”. The album is released in Australia in November 2003.

In the fall of 2003 the song “What’s My Scene” is taken as the theme for the NRL Football season under the reworked lyrics “That’s My Team.” The campaign is the most successful ever undertaken by the NRL and the option for a further three years is exercised.

Enjoying their own company and the music they are playing the Hoodoo Gurus reformed to perform at the NRL Grand Final in October to a crowd of eighty thousand. Following this and performances on the Big Day Out the band signed a new recording deal with EMI Records and released a new album in March 2004 entitled MACH SCHAU.

In 2005 some of Australia’s best and best known bands joined together to pay tribute to the Hoodoo Gurus by recording their own versions of the classic songs from the first album under the title “Stoneage Cameos”.

2007 sees things getting hectic one more time as the Gurus play three shows in one day at SXSW and end up cited as one of highlights of the five days festival. They follow this up with a tour of the US, the UK and Spain. In July the Hoodoo Gurus are deservedly elected to the Australian Music Industry (ARIA) Hall of Fame.

In 2008 they again tour the US and the UK, culminating at a standout performance at the Glastonbury festival

In 2009 the band sign a new recording deal with Sony Records and commence work on studio album 9 – “Purity Of Essence” again working with Charles Fisher as co-producer and having their favourite mixer, Ed Stasium, again look after putting it all in the right places. The first single ‘Crackin’ Up’ is picked up nationally within days of release and the album debuts in the top 20. The album is released in the US, UK, Spain and Brazil in time for the departure mid 2010 on yet another trip around the world.

The Hoodoo Gurus continue on their wonderful journey! 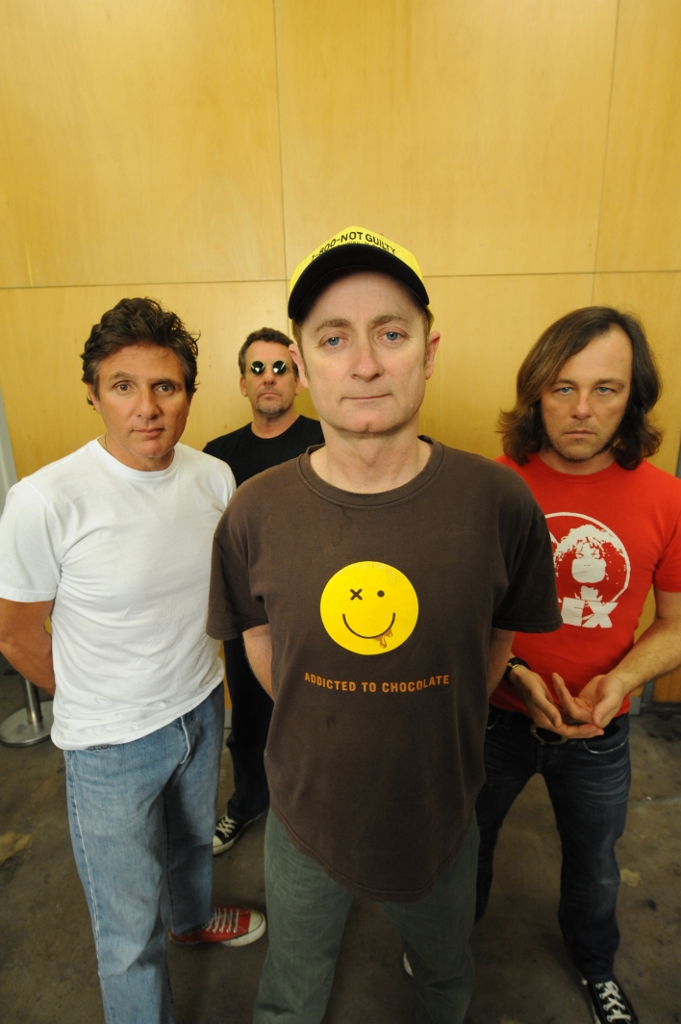