As Martha and the Vandellas once put, “They’re dancing in the street in Chicago, New Orleans, New York City, Philadelphia, PA, Baltimore and DC now…can’t forget the Motor City…Across the ocean blue, me and you.”

The music of Motown traveled around the globe, landing on the other side of the world in Sydney, Australia, where four high school students—brothers Andrew and Mike Tierney, Phil Burton and Toby Allen—were more interested in soul, gospel and harmony groups than their country’s usual obsession with “guitars, grunt and good old rock and roll.” Forming a singing group that began as a tribute to their love of a cappella doo-wop, the foursome was directed to the music of the legendary label by a music teacher.

That was 24 years ago. Today, Human Nature are Australia’s leading pop vocal group, having released nine albums (many containing their own, self-penned original material), five of which went to #1 in their native continent, selling millions of records world-wide and garnering 24 platinum awards, 18 Top 40 hits and five Top 10 hits. The group has opened for Celine Dion and Michael Jackson in Europe and Australia. Their chart-topping Motown tribute, Reach Out, went five-times-platinum, attracting the attention of famed songwriter Smokey Robinson, who recorded “Get Ready” with them and presented them in an exclusive booking at Las Vegas’ Imperial Palace, where they have played five and six nights a week to sold-out crowds for the past two and a half years.
Having inked a comprehensive worldwide deal that includes merchandise, sponsorships and endorsements, ticket/music bundling, touring and corporate gigs with Universal Music Group’s Universal Music Enterprises (they remain with Sony in Australia), Human Nature are ready to tackle America, and carry the legacy of Motown music for a new generation. The first release under the new agreement will be The Motown Record, featuring 11 soul classics plus a bonus track, including “Get Ready,” the band’s collaboration with Smokey Robinson, distinctive doo-wop versions of “Ooh Baby Baby” and “Just My Imagination,” as well as the Four Tops’ “Reach Out I’ll Be There” and “Baby I Need Your Loving,” the Temptations’ “My Girl” and “Ain’t Too Proud to Beg,” Stevie Wonder’s “Uptight,” Martha and the Vandellas’ “Dancing in the Street” and the Supremes’ “Stop in the Name of Love.” The versions are faithful, yet updated and freshened, everything we’ve loved about them renewed and revitalized, performed and arranged by four guys who clearly love to sing and harmonize on these particular songs.
“There is such beauty in the original material,” says Phil Burton. “We didn’t want to make a carbon copy of the songs, but we didn’t want to change them into something they weren’t, either.”
“We put our stamp on these songs by the way we sing them,” explains Andrew Tierney, who is the one with the highest pitch, with brother Mike and Phil in the middle, and Toby on the bottom, trading leads according to whose voice best fits the track. “We wanted to keep the magic by maintaining the energy and fun. It was a learning experience to immerse ourselves into the arrangements, like taking a lesson from the masters.”
Human Nature Sings Motown, a special telecast of the group’s Las Vegas state show filmed by longtime Grammy producer Ken Ehrlich, will be at the center of PBS’ fund-raising efforts in December, featuring an appearance by Smokey Robinson. Ehrlich enthused about working with the band: “When you hear their versions of the great Motown classics, you’re not only reminded of the greatness of the originals, but you hear nuances that bring those originals up to date without tarnishing them in the least.”
A DVD version of the show includes 40 minutes of bonus content featuring the band discussing Motown’s enduring influence with the label’s legendary songwriters Lamont Dozier, Eddie and Brian Holland, all of whom have given their blessings to Human Nature, as well as more than 20 minutes of performances not shown in the original broadcast. Both CD and DVD are exclusive to PBS subscribers through December before being available at retailers in March 2012.
Smokey Robinson, who has nurtured the band and is actively working with them to reinvigorate the Motown brand, says: “The members of Human Nature are extraordinary vocalists who truly now how to entertain and I knew that they would be hugely successful….”
“He’s such a big supporter and it’s just fantastic to have him give his stamp of approval for our take on his music,” says Michael about the legendary performer/songwriter/ producer.
Adds Andrew: “Every time we do something with Smokey, we’re constantly reminded of how lucky we are to have him as a good friend and mentor. It’s been a career-changer for us.”
“I’m still pinching myself,” admits Toby. “Smokey has no need to get involved with something like this if he doesn’t want to. He obviously loves the music, and that’s the greatest satisfaction for us.”
“We were always concerned with what guys like Smokey, Lamont Dozier and the Hollands were going to think, but we’re doing this out of a pure love for the music,” adds Phil. “We’re going back to our roots, the songs we’ve been performing since we first started.”
And now it’s time for Human Nature to conquer America with its own music.
“It was a huge gamble,” reveals Andrew about their decision to come over for a two-week stint at the Tropicana in Atlantic City, where they saw first-hand that their Motown show connected with stateside audiences. “Why should people listen to four white Australians sing these songs when they’re ubiquitous on radio and TV? It just shows that this music is written for everybody, and that it has reached to every corner of the globe, including Australia. And it’s still influencing people, just as it touched us.”
Human Nature’s many accomplishments include performing the Australian national anthem at the Summer Olympic Games in Sydney in 2000, and performing on Oprah last summer, when the show was taped before thousands in Australia, but nothing beats making it in America, the home of not only Motown, but much of the music they are most passionate about.
“Our roots lie in American soul,” proclaims Andrew. “It’s the ultimate market for what we love. It feels like our options are endless. I’m looking forward to continuing our career, making great music, and playing our original songs.”
Get ready… because here comes Human Nature. 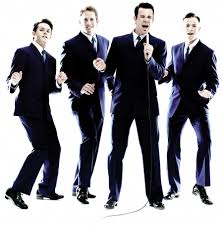