So who are The Idea of North?

In short, they’re a quartet of musicians, serious about their music without taking themselves too seriously.

Their instrumentation: voice (soprano), voice (alto), voice (tenor) and voice (bass), with a little bit of vocal percussion thrown in. They have a beautifully distinct sound and style, but they cross many musical genres: jazz, folk, gospel, pop, classical, comedy – exactly what you see and hear at a concert is difficult to describe.
With eleven albums in the catalogue, a significant local and international fan base, and increasingly regular local and international work, it would seem that despite the difficulty, people are getting better at describing The Idea of North to their friends. You may have heard and enjoyed the CDs (some of them award-winning), but the best stuff actually happens live and can’t be recorded onto plastic, no matter how shiny it is. 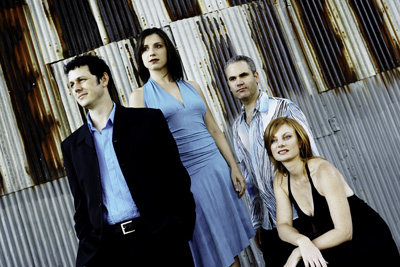