Born in Sydney, Layne Beachley was an adoptee who grew up an independent, young woman in a world of men. She thrived on competitive sport from childhood, particularly tennis, before the surf at Manly Beach completely took over her life. Manly, a two kilometre bike ride from her home, was Beachley’s personal paradise. A naturally outgoing character, she sometimes took hours to get from one end of the mile-long beach to the other, just stopping to talk to people.

At 16 years of age, Beachley was a skinny, determined surfer who bypassed the amateur contest structure and went straight to the pro level, surfing in trial events around Australia. By the age of 20, she was ranked number six in the world and beginning the harsh physical training regime that set her apart from every other woman pro of the past two decades. This training gave her a perfect foundation for big-wave riding.
Although Layne was so committed to her training that in 1993 and 1996 Layne fell victim to the debilitating Chronic Fatigue Syndrome. A mental, physical and emotional challenge, Layne overcame another set back and kept her eyes focussed on the ultimate goal – to be World Champion.
In the early days, Beachley’s career was dogged by an inconsistency which seemed to spring from over-eagerness – she would record a strong win, followed by a series of losses — but at Sunset Beach, the broad open line-up and super-juicy waves made an environment that could absorb the full range of her energies.
Beachley tackled this; the ultimate man’s world, with huge enthusiasm, dominating all opposition and winning both events on the resurgent Hawaiian women’s tour leg in 1996. In 1998 Beachley’s determination paid off as she recorded what was to be the first of seven consecutive World Championships. Beachley now holds the record for the greatest winning margin in the world title race and for the greatest number of consecutive World Championship victories – male or female.
Not one to rest of her laurels, Layne continues to lead the way in women surfing as she strives for an unprecedented eighth world title.
Beachley is renowned for more than her big-wave savvy and scary competitive drive. Never shy, she earned the nickname “Queen of Self Promotion” from an Australian newspaper sports columnist in response to her incessant efforts to publicize women’s surfing. She turns this media prowess to good use as an occasional TV sports reporter and commentator.
In recent years, Layne has also created her own foundation – Aim for the Stars – to support and promote the academic, sporting, community and cultural dreams of young women 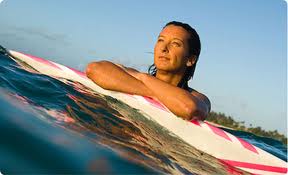