Libby Trickett is Australian Swimming’s Golden Girl. The 22 year old is integral to the recent world dominance of Australia’s female swimmers. In the past 18 months Libby has emerged as one of Australia’s premier sportspeople having turned in numerous world-beating performances. With an infectious smile and affable persona, Libby Trickett is a not only a highly respected athlete, but a well recognised and revered personality

Equally comfortable swimming Butterfly as she is Freestyle, Lenton has won medals at several World standard meets in a variety of disciplines and distances. Whether it be 50m Freestyle dashes, 100m Butterfly, middle distance Freestyle or a thrilling Relay, Libby consistently finds herself on the dias and amongst the records.
Now an Olympic Gold Medalist, Libby had the world at her feet. But the hardworking Queenslander did not rest on her laurels and pushed onwards and upwards in the years following.
In 2005, Libby broke the World Short Course records in the 100m and 200m Freestyle and won 3 x Gold medals at the FINA World Championships. This remarkable form continued throughout 2006. At the Commonwealth Games trials Libby reclaimed the 100m Freestyle World Record from good friend Jodie Henry. She then went on to snare an impressive haul of 5 x Gold and 2 x Silver medals at the Melbourne Commonwealth Games. Libby matched this amazing feat of 5 x Gold at the World Short Course championships held in Shanghai.
2007 saw Libby emerge as arguably the World’s best female swimmer. This was exemplified at the Melbourne World Championships where Libby claimed another amazing 5 x Gold Medal haul.
With the 2008 Olympics just around the corner, Trickett is eager to carry her impressive form onto world sport’s greatest stage. Libby Trickett is one of Australia’s brightest prospects for Beijing 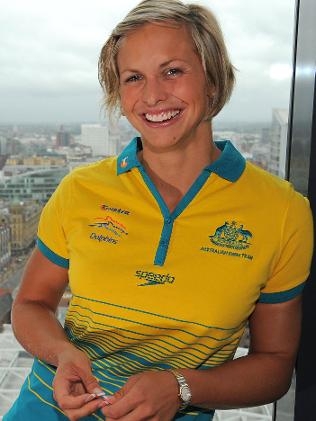