“Comedy Magician – Phil Cass has an international reputation as one of Australia’s most polished and professional comedy entertainers. Amongst his string of prestigious awards in show business, Phil Cass now has 3 Australian Club Entertainment Awards and 7 ‘MO’ Awards for being the Best Specialty Act in Australia.  FIRST CLASS.”

With a middle name like ‘Trust Me’ you can be sure of one thing …… Phil Cass defies the conventional pattern of mayhem in live entertainment with his unique on-stage persona that safely runs the gamut from insult to result!

There is no magician who is in more demand than the popular Phil Cass for everything from clubs, cruise ships and television to after dinner, corporate entertainment in relation to product launches, sports hospitality, awards ceremonies and any manner of corporate hospitality, fundraising, sporting or public event.
The style and close-up magic of Phil Cass is absolutely, positively, mind-boggling …. sleight-of-hand and theatrical pick pocketing are very powerful entertainment weapons indeed …. especially when mixed with his brand of humour!
Phil’s stand up act is full of side-splitting comedy coupled with intrigue and involves a high level of audience interaction. It’s an act that is guaranteed not to fail. It is for precisely these reasons that he finds himself in extreme demand in the corporate arena. Just to drop a few names, Mercedes Benz, IBM, AMP, Telstra, Optus, Carlton & United, McDonalds, Sony, Ford, XXXX, Coca-Cola and Lend Lease have all experienced his unique presentations many times over!
The large production shows that he produces are packed with mystery, drama, suspense, hot dance numbers and even a touch of macabre as well as the outstanding comedy routines for which Phil has become famous … err, infamous. His credentials include making cars appear, levitate and disappear as well as the sudden appearance of the odd elephant or horse!
His showmanship and versatility has been the key to his popularity on live stages throughout the world. His broad spectrum and national appeal has seen him rewarded with numerous prestigious awards. 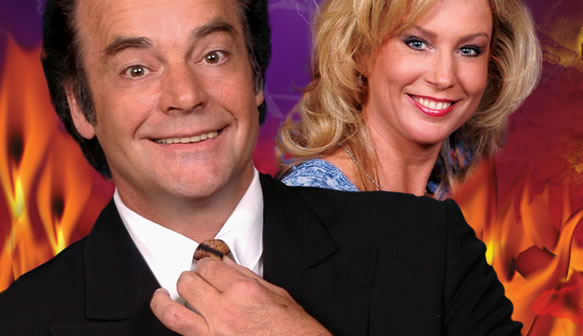