Raymond Crowe is described as one of Australia’s leading contemporary magicians. His innovative, fresh approach delights audiences both intimate and grand. With his warm sense of humour, contemporary approach and highly skilled traditional techniques, Raymond Crowe invites us to impart on a journey that transcends belief in his half hour Cabaret Show.

HOW GOOD IS RAY CROWE?
At a recent conference and event industry showcase Ray Crowe performed before several 100 very discerning individuals from across the events industry. The formal feedback provided the following – an amazing 96.84% rated Ray Crowe as Excellent. The popularity of Ray Crowe amongst his peers and audience is such that he was invited to become the first-ever Australian Magician to be on the now famous NBC TV Special – “Worlds Greatest Magic”. This 4th annual TV Special was filmed before a live audience at Caesar’s Palace in Las Vegas and includes what are considered to be the 20 greatest magicians in the world! The show was viewed by over 20 million people worldwide.  Ray Crowe was also a featured act for the toughest audience in the world – Ray received a standing ovation from 3000 magicians at the World 2003 Magic Convention.  In 2007, Ray’s famous shadow puppet routine was up-loaded onto You-tube which resulted in a huge global demand for his show. It also resulted in Ray appearing at the Royal Command Variety Performance in December 2007 and on the David Lettermen show in February 2008.

THE SHOW  In this solo Cabaret show we see Raymond and his self-inflicted magic sprinkled with witty, charming comedy, fun audience interaction – participation, and sleight of hand manoeuvres that have to be seen not to be believed.  This show is a collage of Ray’s most sought after sketches that have amazed audiences both grand and intimate, throughout the world.  All of Raymond’s shows include two of his most talked about sketches…  Ray’s unique brand of entertainment includes a fine understanding of the art of ventriloquism, which when tempered with Ray’s gentle good nature lets his “volunteers” become the stars of the show in a section entitled Funny Voices, which is a fun audience interaction segment.  Watch as Ray gets a volunteer from the audience, substitutes their voice for a weird character voice and lets them produce the magic. Not only are the volunteers from the audience amazed at their new voice, they are totally captivated with the magic that they assist Ray to produce.  His show would not be complete without what has now become his signature farewell piece – The Shadows. It is one of Ray’s most outstanding works and often literally has audiences laughing in tears. 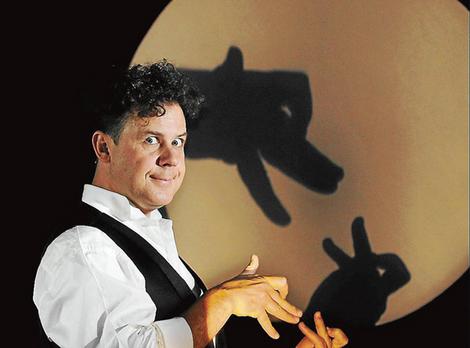