If you like your entertainment shaken not stirred, then look no further than the Swingin Martinis. With a double scoop of musical mayhem and some good old slapstick, the Swingin Martinis have put together a cocktail that every self respecting swinger will not want to miss out on.   Performing all the uptempo classic hits from the famous crooners such as Frank Sinatra, Dean Martin and Tom Jones (to name a few) and incorporating audience participation the Swingin Martini’s guarantee to add excitement and side splitting laughter to your event.

They have taken the classic double acts of old and added their own unique style to meet the demands of a modern audience. Some of the songs performed during their show include; Big Spender, That’s Amore, Love and Marriage, Copa Cabana, Not Unusual, New York New York, Lady is a Tramp,Gigolo, Fly Me to the Moon, That’s Life, Makin Whoopee, Sway, Come Fly With Me, I Go To Rio, I Get a Kick Out of You, My Baby Just Cares for Me, Love Boat, Suspicious Minds, Strangers in the Night, Puttin on the Ritz, Everybody Loves Somebody and Delilah.   The Swingin Martinis have played with such legendary performers as Shirley Bassey, Bette Midler and Sammy Davis Jnr. They have also performed for Sir Richard Branson and Queensland Premier Peter Beattie 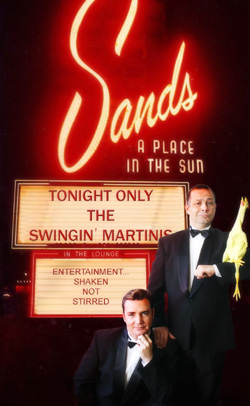