Fronted by the original Elton Jack Lance Strauss this show has become the world’s best known
Elton John Tribute act. The show celebrates the music and lyrics of Elton John.   Since 1989 The Elton Jack Show has been in great demand for concert, corporate and cabaret appearances. They have graced the stages from the Sydney Opera House to the Royal Albert Hall from the beaches of St Tropez to the jungle of Borneo. From Bathurst to Budapest the Elton Jack Show has performed before millions of people all around the world.

Whilst celebrating the music of Elton John and Bernie Taupin, the Elton Jack show has also brought its own interpretation to some of their material. The genesis of Elton Jack can be traced back to an appearance by Lance Strauss in August 1987 on the “Red Faces” segment of Channel 9?s Hey Hey It’s Saturday. Lance’s acting and singing abilities along with an uncanny resemblance to Elton John propelled Hey Hey?s host Daryl Somers to invite him for a return appearance the following week.   Subsequently, there were a number of solo performances in small hotels and clubs before he was convinced, somewhat tentatively to form a band. Lance had moved to Sydney in 1986 to join a short lived stage show called “Lennon, The Musical”.   It was amongst the ambiance of the Enmore Theatre, that the heart of the “Elton Jack Show” was born. Little did he know that this tiny portable show would go on to play close to two thousand shows, over the coming years, through fifteen countries.   The Elton Jack Show is arguably one of the world’s best tribute shows. 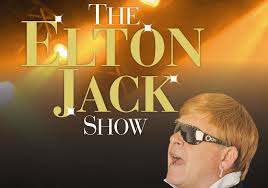