Tim Horan is possibly the greatest centre rugby union has seen. Electrifying pace, rock-solid defence, an ability to read the play like a book, lethal with ball in hand. . . he offered it all during his sparkling 11-year Test career with the Wallabies.

He earned his first gold jersey as a teenager against the All Blacks in 1989. Australia lost that match but Tim earned the respect of all. Two years later at the 1991 World Cup Tim was crucial to the Wallabies success, most notably when he gobbled up and scored from David Campese’s memorable over-the-shoulder, no-look pass in the semi against New Zealand. No try has been given as much replay time since.
In 1999, he became Australia’s third most capped player and most capped Australian centre, guiding Australia to its second World Cup victory. He won every award going around, and was announced Player of the Tournament. Tim surprised many the following season when he announced his retirement from international rugby to play out his career with the famous Saracens club in England. Some considered it too soon; Tim knew what he was doing. He wanted to go out a winner. And he did. Tim’s Rugby achievements were given the utmost recognition in 2003 when he was inducted into the International Rugby Hall of Fame.
Tim has melded his natural leadership abilities and flair for public speaking and utilised them to effect a seamless transition to the next phase of his career. As Business Development Manager for Meridien Funds Management, Tim develops relationships with investors and institutions for various property funds.
Tim is also a much respected member of Channel Seven’s rugby commentary team, following on from his significant role during the 2003 Rugby World Cup coverage and has taken on an Ambassadorial role with Total Sport Travel.
Tim is a selfless contributor to the community, acting in an ambassadorial role for the Spinal Injuries Association speaking to school children regarding prevention of spinal injuries. Tim is also an ambassador for Aunties and Uncles – a non-profit organisation offering friendship, role-modelling and support for children in single parent or parentless families. 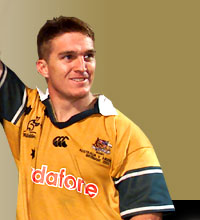