In addition to being a professional Rugby League captain and coach at the highest level for over 20 years, Wayne Pearce also completed a university degree (which included three years of psychology studies) as well as working in the corporate world for six years as a sales executive.

Wayne’s leadership and teambuilding skills have been widely acknowledged in the sporting community, and he was awarded the Medal of the Order of Australia for services to Rugby League and the community in 1988.

Wayne still enjoys his current involvement in Rugby League as a Fox sports commentator, however since leaving club coaching in September 2000, his main focus now is on corporate speaking, corporate teambuilding and personal development programs.
His “Team Excellence” Programs increase productivity in business by nurturing teamwork and boosting personal motivation levels.
Wayne is also available for keynote speaking… where he can help reinforce a motivational or corporate theme or if you prefer, Wayne can provide an entertaining and humorous after-dinner insight into the life of a professional athlete.
Wayne was born and raised in the inner city suburb of Balmain, and played 188 premiership games for the Tigers between 1980 and my retirement in 1990. He was captain of the club for seven seasons, including four successive Panasonic Cup Finals (1985-1988) and two grand finals (1988 and 1989).
At representative level, Wayne played fifteen State of Origins for New South Wales. He was the captain of the NSW Blues from 1985 to 1988, including the first ever State of Origin clean-sweep in 1986.
Wayne also played eighteen Test matches for Australia. On the 1982 “Invincibles” Kangaroo Tour, he was voted best player on the tour and in the 1984 Ashes campaign against Great Britain, he was again voted player of the series.
In 1985, Wayne won the Rothman’s Medal (Rugby League’s equivalent of the Brownlow Medal) as the best player in the game. 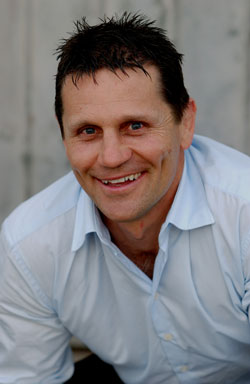