Mikey Robins is one of Australia’s best loved, intelligent, hilarious and most in demand entertainers, his career in both radio and TV has led to him becoming one of the most recognisable faces and voices in Australian entertainment history. He’s an integral member of the iconic program Good News Week which has made a remarkable return to Australia television and is winning its time slot and key demographic week in – week out on Network Ten.

“Our guests have given us such superb feedback! Many commenting on how fortunate we were to have secured you and what an inspired choice you were!” (Cathrin Cassarchis – WA Museum Foundation)   Mikey’s career radio credits also include key roles in Drive and Breakfast shows on both Triple M and Vega FM, prior to which he spent 7 super successful years as the Host of Triple J’s National Breakfast Show.
Mikey’s early TV career included “Live & Sweaty” and “McFeast”, before he moved on to the legendary “Good News Week” for 5 years on both ABCTV and Network Ten. He also devised and hosted a series of humorous documentaries for Network Ten on Australians and their favourite pubs, the success of which lead to shows being filmed in both Ireland and Las Vegas.
On Foxtel Mikey Hosted “Campaign” during 2001 and he’s been a regular guest on ABCTV’s “The Fat” and then with “110% Tony Squires” on the Seven Network. Recently Mikey also fronted the Foxtel’s Movie Networks Hollywood Head 2 Head promotion, and exciting new option for viewers to vote on which movie they’d like to view on Saturday nights.
Mikey has Co –Authored 2 books “Three Beers and a Chinese Meal” with Helen Razor and “Big Mans World” with Tony Squires and The Sandman.
Mikey’s quick wit, intelligent humour and years of experience make him an ideal MC/Host for corporate events. One of the many high profile events he has hosted was Gough Whitlam’s 85th Birthday. Mikey’s experience in TV, Radio and live theatre has also given him enviable skills in the area of debating and public speaking. 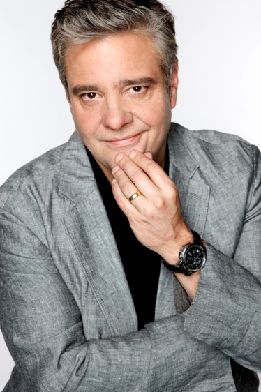