In 2007, Tom performed his brand new stand up show Tom On! at the Adelaide Fringe and Melbourne International Comedy Festival. This follows the sell out success of last year’s Non Stop Tom and being invited back to the prestigious Montreal Just for Laughs Comedy Festival for the second time.  You might know Tom as the Australian Fast Bowler from Channel Ten’s AFI nominated comedy show, Skithouse, or as Australia’s Brainiest Radio Star or as a regular on Channel Nine’s Big Questions. He has also appeared on Rove Live, Glasshouse, Stand Up, Sunrise, World Comedy Tour and The Melbourne International Comedy Festival Gala.

You may have also heard Tom as half of the Tom & Subby Show. It first appeared on Triple J before it moved to Triple M where it was nominated for an Australian Commercial Radio Award.  In 2005, Tom was published for the first time by Random House with his story The Italian Job. It appears in Take Me With You a collection of tales of long distance love edited by Sarah MacDonald.  As a stand up, there is not much Tom hasn’t done. He has performed in every capital city in Australia as well as London, Edinburgh, Montreal, New York, Los Angeles, Singapore, Jakarta as well as entertaining the troops in Iraq and Afghanistan. He was also selected to perform as part of the Melbourne Comedy Festival Roadshow in 2001, 2002, 2003, 2004, 2005 and 2006. 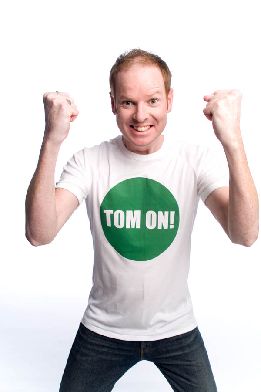